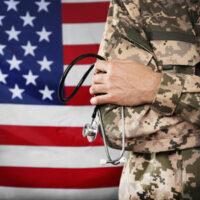 Back in December of 2017, the son was a corpsman with the U.S. Navy, serving as a pharmacist in a military hospital. At that time, the corpsman was scheduled for a routine shoulder surgery.

After undergoing the surgical procedure, the corpsman complained of agonizing pain. In response, medical staff increased the corpsman’s prescription for oxycodone, provided a muscle relaxer, and applied a morphine drip. Less than three days later, roommates found the corpsman dead in their apartment.

The corpsman’s mother felt that medical staff caused the death by overprescribing opioids. An autopsy revealed that the corpsman took the proper amount of medication prescribed by medical professionals. So the corpsman did not over-consume his medication.

Despite these realities, the corpsman’s mother was not able to pursue a medical malpractice claim against the U.S. Navy due to the Feres Doctrine.

What is the Feres Doctrine?

The Feres Doctrine traces back to a 1950 case in U.S. Supreme Court. In this case, a service member’s family attempted to sue the U.S. government for wrongful death. The service member in question died as a result of a fire on a military barracks, apparently due to defective equipment and improper procedures.

Extending the concept of sovereign immunity, the U.S. Supreme Court decided that the government was not liable for wrongful death. More specifically, the court determined that the U.S. military branches were not liable for medical malpractice claims concerning injuries sustained in the course of active duty.