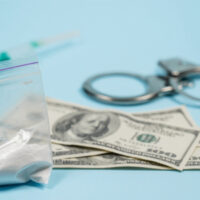 A crime, drug possession is when a person is knowingly and willfully in possession of illegal substances. This could include cocaine, marijuana, heroin, or another drug. Of all the drug arrests in the U.S., over 80% are drug possession.

It is possible a person charged has violated both state and federal laws. Every situation is unique and needs to be assessed individually. In the event of a drug possession charge, you need the experience of a Baltimore criminal lawyer

In order for prosecutors to prove possession, they must establish a couple of things.

So, in short, the person had to have known they had the substance and had to have known it was an illegal drug. For example, if a person borrows another’s backpack and has no idea there are drugs in the bag, they may not be guilty of drug possession if they can prove they had no idea they were there.

There are also examples of drug possession for other items beyond the actual drug, which may include chemicals that are used to make methamphetamines. In these instances, the prosecutors need to prove the defendant knew they had the chemicals and had them with the intent to manufacture an illegal drug. There are also times when drug paraphernalia connects to a drug charge.

Depending on the situation, a person could face a possession charge in one of two categories:

The severity of the punishment will be connected to the type of charge. It is common for a lesser punishment, such as a misdemeanor, to be connected with simple possession. Intent to distribute can come with sentences that are far more severe. This is because intent charges come when a person is in possession of a larger amount, quantities that lead law officers to believe they are planning to sell the drugs or share them with a larger group. Evidence gathered can prove distribution intent as well, including plastic baggies and scales associated with weighing drugs.

Individuals who are charged with drug possession with an intent to distribute can face large fines and possible incarceration. Of course, the type of drug and the amount of the drug the person was in possession of will impact penalties and punishments. Discuss your situation with a Baltimore criminal lawyer to understand what the options are available.

There are times when rehabilitation rather than incarceration is possible. Random testing for substances can also be ordered along with fines. It is common for people who are incarcerated to be repeat offenders. For this reason and others, rehabilitation can be the best solution for a person coping with substance abuse issues.

Do you have questions about a drug possession charge? You need a Maryland criminal lawyer on your side. Contact the legal team at Iamele & Iamele, LLP to understand your options. Contact us today for a free initial consultation.