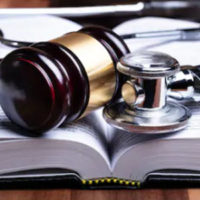 The Court of Appeals of Maryland confirmed that the One Satisfaction Rule prevented a victim from pursuing medical malpractice claims against both an insurance company and hospital at the same time.

In order to understand the significance of this decision, it will be helpful to review the factual background and legal analysis of this case.

In 2009, the plaintiff was involved in a car accident when another driver struck her vehicle from behind. As a result of this accident, the plaintiff suffered serious physical injuries and required intensive medical treatment.

From 2011 to 2012, the plaintiff received professional treatment at the Mercy Medical Center. Specifically, hospital staff performed two separate reconstructive surgeries. In the aftermath of those procedures, the plaintiff developed an infection referred to as cellulitis.

Thereafter, the plaintiff underwent vascular surgery at the same hospital to repair the affected artery. And the plaintiff received ongoing treatment for pain and dysfunction in her left arm.

The plaintiff settled her claim against the other driver in 2012. She received a damages award of $25,000 and released all further claims against that driver. Though the plaintiff also expressly reserved her right to continue her lawsuit against the insurance company.

The plaintiff’s lawsuit against the insurance company also proceeded to discovery in 2012. The case progressed to trial in 2015. Though after opening statements, the parties agreed to settle the case for $125,000.

Toward the end of 2015, the plaintiff filed a lawsuit against Mercy Medical Center, alleging negligence. This case progressed through discovery and entered the trial phase. At that point, the hospital filed a motion for summary judgment, arguing that the plaintiff already received compensation for her injuries and citing the One Satisfaction Rule.

Consequently, the Circuit Court granted the hospital’s motion for summary judgment and dismissed the plaintiff’s claim. The Court of Special Appeals agreed with that rationale. Then the Court of Appeals confirmed both of the lower court decisions, determining that the One Satisfaction Rule prevented the plaintiff from recovering against the hospital.