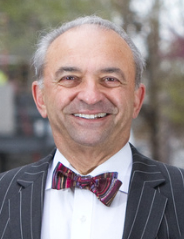 Domenic R. Iamele was born in April of 1944 and raised in Brooklyn, New York. Domenic Iamele graduated from the New York University in 1965 and then earned his law degree from the University of Baltimore School of Law in 1969.

Domenic Iamele began his legal career with the Baltimore City State’s Attorney’s Office. Between 1970 and 1975, working as Assistant State’s Attorney, Domenic Iamele prosecuted the gamete of criminal matters, from benign misdemeanor to the most serious capitol offenses. Domenic Iamele later left public service to become an associate with the firm of Edelman, Levy & Rubenstein, where his practice focused on labor law and the representation of unions before federal and state courts, as well as the labor board. In 1980, Domenic Iamele formed the law firm of Levy & Iamele.

For more than twenty years Domenic was a principal in that firm, during which time he had occasion to handle and try thousands of criminal, personal injury, automobile accident, malpractice and workers compensation cases throughout the State of Maryland. In 2004, Domenic affiliated himself with his son and formed Iamele & Iamele. The collaboration between the father and son produced instant results when they obtained a jury verdict in excess of $100 million in the first case that they tried as a team. Together, they are now focusing their attentions on representing injury victims and criminal defendants.

Negligent Security: Client injured when crowd surge caused him to be pushed under a Light Rail Train